Travelogue to Greece, Part I: Athens

After the nightmare called the Bar Exam, most people take the obligatory post-Bar trip as the last hurrah before their law school career officially ends. So, of course, I went back to Thailand to see my family, and off we went to Greece! We arrived in Athens, checked into the hotel, and wandered around the historic city. After a bit of sightseeing, my sister and I needed a little snack. Restaurants all over the city offer street-side gyros served on pita bread--yum! 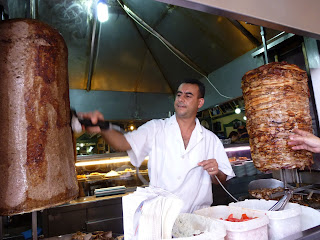 Most places offer lamb gyros, but some also offer pork and beef. Definitely a tantalizing sight and smell as you're walking around the city! 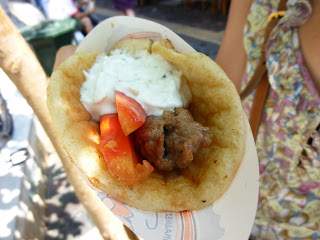 Here is our official first lamb gyros sandwich of the trip--and probably the best! The gyros had a nice crust and caramelization from the lamb rotating on the vertical spit. The creamy Tzatziki (cucumber yogurt sauce) and fresh tomato perfectly complemented the gyros on the delicious pita bread. 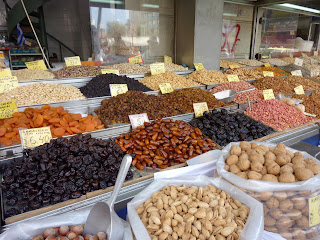 We wandered around Athens a bit more, stopping at some outdoor market. The Greeks sure love their dried fruit, nuts, honey, cheese, and yogurt! 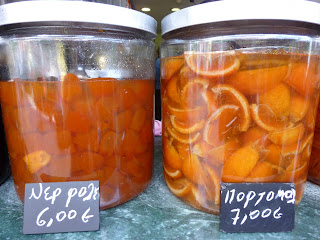 Some apricots and oranges preserved in honey. After looking at all the beautiful food, we were ready for a real meal! 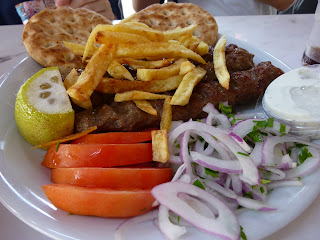 We walked up to a little restaurant and ordered a couple of dishes. We got a plate of lamb Souvlaki, or marinated lamb grilled on skewers, served with the staples--pita bread, tomatoes, red onions, and Tzatziki (excluding that sad handful of fries). 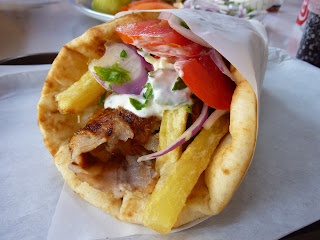 We also got a pork gyros pita sandwich, which came with fries inside. It was like a Greek equivalent of a California burrito--not too shabby! 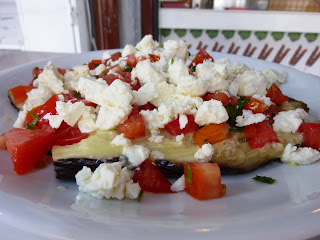 My sister Pinnerton ordered this dish of grilled eggplant, generously topped with dices of tomatoes and crumbles of feta cheese. I was not a big fan of this dish because there was no texture contrast--everything was just mushy.

After lunch, we visited the National Archaeology Museum of Athens where we got a taste of how much history is in this country. 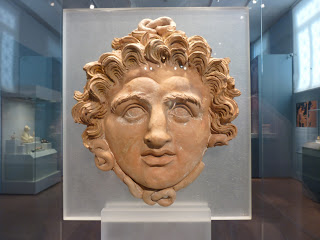 The museum housed, among many artifacts, the famous Gargon's Head (350-325 B.C.!), which represents the head of Medusa, the most famous of the three Gargons.

We spent the first evening in Greece on some dinner and a show tour (I believe it was called a Night in Athens), which was just awful. I wish we would have stayed away from that and just checked out a local taverna in Plaka (Old Town).

Our first full day in Athens, we did a lot of sightseeing. We visited the Syntagma Square and made our way over to the Acropolis, a UNESCO World Heritage Site. 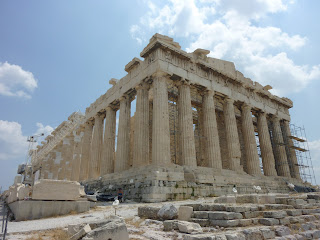 The most famous structure at the Acropolis of Athens is undoubtedly the Parthenon. The architecture and history were reflective in this impressive sight, and, as you can see, they had started a wide scale restoration of the temple and other structures in the Acropolis.

By the way, Greece is scorching HOT in August! I think we nearly died of exhaustion and heat stroke hiking up to the Acropolis. The blood orange Powerade was definitely a much needed replenishment of electrolytes!

Since we were starving and exhausted, we just stopped for quick lunch at cafe atop the Acropolis Museum. 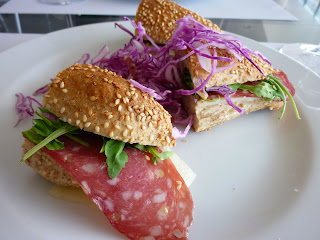 I ordered the sandwich with salami from Lafkada with Cretan gruyere cheese, rocket (arugula), and virgin olive oil. A simple and tasty sandwich that showcased local products. 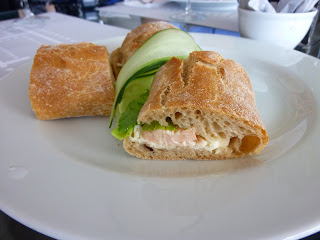 My parents opted for a smoked trout sandwich with celery and lime. I think they enjoyed it, but I'm not a big fan of smoked trout and celery, so I didn't bother to try any. The cafe at the Acropolis Museum was a nice way to take a breather and enjoy a view of the ancient city. 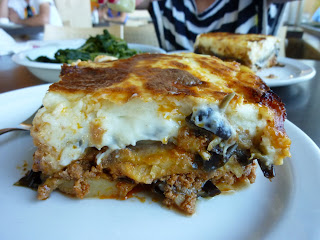 After a day of sightseeing in the heat, we took it easy for dinner and just walked over to a mall in Athens where there is a small diner on top of the building with a nice view of Athens. My sister and I tried our first ever Moussaka, which is a traditional dish layered with ground meat, eggplant, and bechamel sauce. It's like a Greek lasagna, but I thought this one had a little too much bechamel sauce.

Part II of LMC's travelogue to Delphi, Meteora, and (the best part) Santorini is coming up next!

Hi LMC - Gorgeous photos of Greece and the food looks great too! I also don't like mushy foods; I prefer texture or some sort of crunch or firmness.

Greece was gorgeous--and terribly hot! Hope you like part 2!